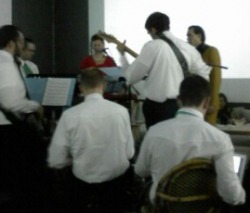 Playing to a chill audience sat on slouchy, bed-like couches, Owen Lake and the Tragic Loves gave their first full-band performance at Monkeytown last Friday.  As country music covers with an electro spin spun out into the room, colorful, hexagonal shapes were projected onto screens on all four walls, Owen’s stiffness in his mustard yellow suit and slicked back hair adding old school country charm.

Tight vocal harmonies and retro synth patches adorned country classics like “Holding on to Nothin'” and “I Wish It Had Been a Dream,” the latter of which featured harmonizing between Owen Lake and guitarist Tommy Byrd, electronic drum sounds, and lots of space between the low, boomy bass and the high pedal steel guitar.
Other highlights: “Walk Softly,” with its minor key, dance club feel and impressive steel guitar soloing.
“Pardon Me, I’ve Got Someone to Kill,” a Cocteau Twins-esque opening, the vox and steel guitar expressing the country spirit within a dream pop setting.